While I am here at my desk in Northern Finland, in the city of Rovaniemi, located exactly on the Polar circle, I noticed that I come across quite frequently with two terms that sound somewhat similar. Climate change and change management. By the way, “quite frequently” is a massive understatement in terms of climate change, while not only the term, but also its impacts occur in the every-day life here in the Arctic.

While these terms sound similar, it is perhaps not that easy to draw a sensible connection. The reason of opening up this issue is the urgent need of the society to counteract the negative impacts of climate change with mitigation strategies, adaptation activities or both. Can change management be one instrument on this path that might help? Well climate change and change management, evidently both entail the word “change” and here is the essential difference. While global warming is a “change” that is to the largest extent unwanted by the society, change management on the contrary is striving for “changes” that allow improvements or even continual improvements. Hence “changes” that we want and aspire.

It is a matter of what we want and what we don´t want. Let´s take my neighbourhood in Arctic Finland for example. What do I want or what I would prefer not to happen here. Well, the Arctic environment is as fragile as it is beautiful. I would like to see that level of biodiversity remains at least as it is. I would like to have snow instead of rain in December (as it is supposed to be in the Arctic). I do not want to read again that thousands of reindeers starved this winter in the Nordic countries and Arctic Russia, because they are not able to adapt fast enough to climate change. These are very few local examples from the far North and there are countless examples in so many other parts of the globe. (Let´s take into account all the regions in the world, which face extinction, if the sea level rises only a few metres).

So what can change management do for us, the organisational approach to step from a present state to an improved future state. Let´s have a look at four procedural steps of change management as developed by the Change Management Foundation and W. E. Deming, who coined the Plan-Do-Check-Act model. Both models embrace a number of procedural steps that need to be done in a certain order. 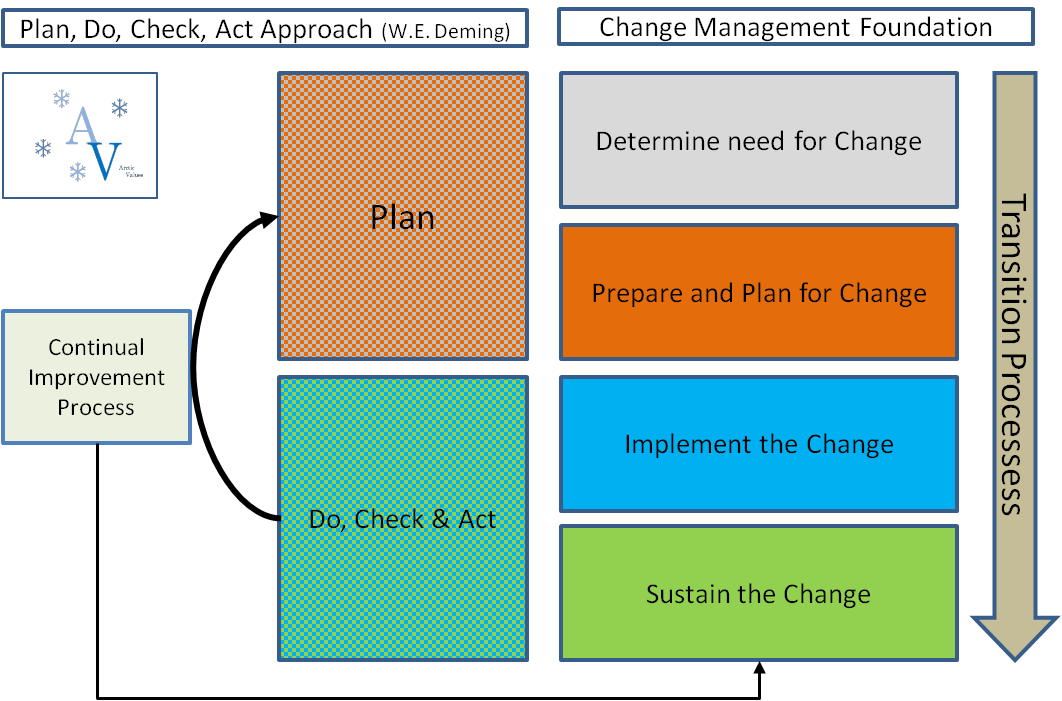 By considering climate change, we have to think even a bit further than the present state. The present state is what many would consider as acceptable or with a good portion of scepticism is the best what we will see in the upcoming decades and centuries on the planet. Hence, we have to determine, where are we heading to without any proactive counteraction, where do we go with moderate action and where could we go as a global society if we put all possible efforts (as painful as it might be) in it.

This being said, we notice that change management linked to climate change is under way in many ways and conducted by many actors already today. The IPCC (Intergovernmental Panel on Climate Change) published several assessment reports predicting in multiple scenarios what is going to happen on this planet in the upcoming century. The UNFCCC (United Nations Framework Convention on Climate Change is the intergovernmental body that tries to coordinate actions to maintain a moderate climate, allowing the avoidance of negative impacts to the greatest possible extent.

So, the planning phase is under way and this already since the 1990s. It is the implementation and persistence of proactive sustainability practices that makes the global society struggling. Even though, there are numerous environmental programmes and sustainability initiatives everywhere on the globe (renewable energies/ low-carbon strategies/ novel green technologies/ waste management approaches), the scale does not match the actually required actions. There are examples of sustainability projects that perform well in local and regional levels, but to succeed in national and global perspectives, much more effort is needed. Change Management can be helpful to set up the framework on this path, but at the end of the day, the real mitigation and adaptation activities matter the most.

Arctic Values goes beyond the conventional thinking of monetary and shareholder values. The Arctic is a unique place and offers a myriad of unique values, that provide a surplus to everybody, who is linked to this great region in one way or the other.